What is Anterior Uveitis?

Approximately three out of every 10,000 people are affected by uveitis in the UK every year.

Uveitis is a serious condition which occurs when part of the eye called the uvea becomes inflamed; causing pain and changes to vision. Depending on the severity and the part of the uvea that is affected, it can lead to complete sight loss.

This is because untreated uveitis can lead to additional complications, such as glaucoma, cataracts, or retinal detachment. Early detection is therefore vital.

Uveitis can happen at any age, however it is most common in people who are between 20 and 59 years old; but it can occur in children too. When it comes to gender, men and women are affected equally.

Today we’re talking about anterior uveitis. If you’re curious to learn about the symptoms, risk factors and treatments for this condition, read on.

The four types of uveitis:

The eye is made up of three layers; the tough outer layer (white of the eye), the innermost light sensitive layer (the retina) and the middle layer, called the uveal layer.

Anterior uveitis affects the uveal layer; which is formed of:

There are four different types of uveitis. These help determine which part of the uveal layer is affected and therefore which treatment will be most effective. 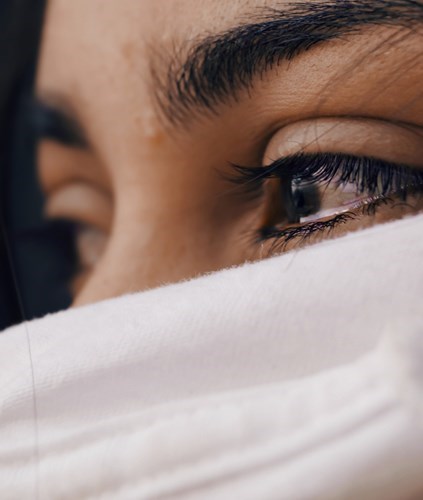 Anterior uveitis is the most common type of uveitis, making up around 40-70% of all cases. It develops in the iris or ciliary body at the front of the eye.

Anterior uveitis is usually acute, which means it develops suddenly and lasts for a few months; accompanying pain, light sensitivity and redness. Those who suffer this type of uveitis will usually have reoccurring episodes. However there is treatment, which we talk about later on in this article.

Intermediate uveitis is inflammation of the vitreous humour (jelly-like fluid that fills the eye). This is the least common type of uveitis, making up only 7-15% of cases.

Symptoms include eye floaters and blurry vision; usually lasting for a long time with reoccurrences every three months or so.

Posterior uveitis is inflammation of the back of the uvea, affecting the retina and the optic nerve (the path that transmits images from the retina to the brain). It accounts for 15-22% of all cases of uveitis.

In rare cases, inflammation can affect the entire uvea; this is called panuveitis. People with panuveitis are more likely to experience vision loss.

What are the symptoms of anterior uveitis?

Symptoms of uveitis can either develop very suddenly or gradually over the course of the week. The symptoms usually affect one eye at a time.

If you are experiencing any of the below symptoms, you may be suffering with anterior uveitis:

Seek medical advice if you notice any sudden changes in your eye sight.

What are the causes of anterior uveitis?

In many cases of uveitis the cause is unknown. It can derive from infections or existing health issues.

Viral, bacterial or parasitic infections, such as tuberculosis or herpes, have also been linked to anterior uveitis.

Similarly, individuals who are born with particular genes, for example the HLAB27 gene, are said to be more likely to develop this condition.

An optician should be able to decipher the cause and recommend suitable treatment.

What is the treatment for anterior uveitis?

Most cases of anterior uveitis are treated with steroids. This medication works by disrupting the normal function of the immune system, putting a stop to the release of the chemicals that are causing the inflammation.

Steroid medication for anterior uveitis is administered in the form of eye drops or tablets. Injections are more appropriate when dealing with intermediate or posterior uveitis. Surgery is sometimes recommended for extreme cases.

Let’s explore the treatment options and possible side effects.

Steroid eye drops will usually be prescribed as the first port-of-call to treat anterior uveitis; as long as infection isn’t present.

These should be taken exactly as directed by the prescribing doctor. This is because the dosages needed will vary from person to person. Where one patient will need to have eye drops every couple of days, another may require hourly doses.

Side effects of short term steroid eye drop use are limited. Patients will be advised against wearing contact lenses during the course of treatment because the medication can decrease resistance to infections; putting the patient at greater risk of developing additional eye infections.

Long term usage, however can cause slightly more serious side effects. Extended use can increase the pressure in the eye; which can lead to glaucoma, a serious eye condition, affecting around 480,000 people in England alone.

Cataracts is another risk factor associated with ongoing use of steroid eye drops. A cataract is the medical term used when the eyes’ lens begins to cloud; creating a feeling as if looking through frosted glass.

There’s no need to panic if your anterior uveitis treatment takes a number of months. Your ophthalmologist will keep a close eye on changes to your vision and regularly check for complications.

A mydriatic is a chemical that induces dilation of the pupil. Mydriatic eye drops are sometimes prescribed in addition to steroid eye drops for anterior uveitis patients. These drops work by dilating the pupil and relaxing the muscles in the eye; ultimately relieving eye pain.

It’s useful to know that these types of eye drops, like most, may cause temporary stinging and blurred vision. This can last for hours or even days, activities such driving should stop until the blurring has disappeared.

Corticosteroids tablets are the strongest form of steroids and will be used when eye drops are not effective for treating anterior uveitis and if there's a risk of permanent damage to vision.

For some, a three to six week course will be sufficient; however severe cases may require a much longer course.

Side effects for tablets are undesirable and can range anything from:

Patients who have been prescribed corticosteroids tablets will be advised when and how to gradually wean themselves off the medication by their doctor.

If anterior uveitis is severe or recurrent a procedure called vitrectomy may be necessary; as a last resort.

Like all operations, a vitrectomy carries a risk of complications. These include needing further surgery and an increased risk of developing a cataract.