Monovision is a popular treatment for presbyopia; a progressive condition in which focusing on near-range objects becomes difficult. Presbyopia affects everyone at some point and usually sets in after the 40 year milestone.

Because of this most people aged 40 and over require reading glasses or varifocals. Monovision allows these people to achieve good functional distance and near vision; reducing or eliminating reliance on glasses and contact lenses.

Here we talk about monofocal lens implants; the pros, the cons and the alternatives.

How does monovision work?

As mentioned before, people with monovision will have one lens in one eye to correct distance vision and one lens in the other eye to correct near vision. In order to select which eye receives which lens, the optometrist will first determine which eye is most dominant. 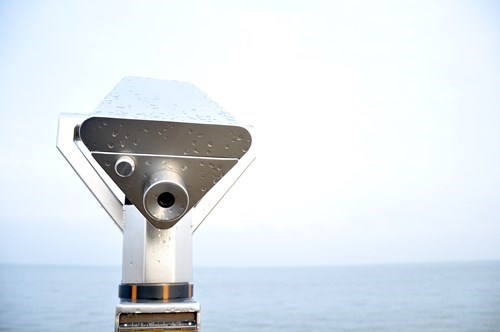 Everyone has a dominant eye; which will transmit information more accurately to the brain than the less dominant one. We don’t notice the difference in eye power because our clever brains have learnt to use the dominant eye more to place objects accurately.

Curious about which eye is your dominant eye? It’s easy to find out…

-Create a triangle with both hands and raise them to eye level. Center an object into this triangle, which is located in the not too far distance; such as a clock on the wall.

-Close your left eye- if the clock remains central, your right eye (the one that's open) is your dominant eye. If the object is no longer framed by your hands, the left eye is the dominant eye.

For monovision patients, the dominant eye will be fitted with a lens that is designed for distance vision, ideal for activities such as driving. Consequently, close-up objects will appear to be blurrier through this eye.

The ‘weaker’ eye is then fitted with a lens designed to focus on close-up objects- suitable for activities such as reading. Distant objects will therefore look blurrier through this eye.

Monovision is beneficial, but can take some getting used to. The eyes and brain must learn how to work together to create a clear image. The majority of people adapt fairly quickly and easily to monovison.

Satisfaction with monovision is generally fairly high, however some people complain of loss of depth perception; the ability to see things in three dimensions (including length, width and depth).

The alternative to monovision

Like with all procedures, they can come with their shortcomings. For some, monovision doesn’t provide adequate near vision, whilst for others distance vision is compromised; meaning complete freedom from glasses has not been achieved.

For these people, multifocal lenses offer a great solution. The multifocal lens was introduced many years ago and has since become the lens of choice among many lens replacement patients and surgeons.

Multifocal lenses differ from monofocal lenses because they are designed with several prescriptions built into one. This allows the wearer to focus on objects close-up, in-between distances and in the distance- a popular option when tackling presbyopia!

In most cases, patients who opt for a multifocal lens implant do not need to rely on glasses or contact lenses.

Prior to surgical monovision correction, we advise that you complete a ‘trial-run’ using contact lenses. A three to four week period should give you a good idea of how well your eyes adapt to monovision.